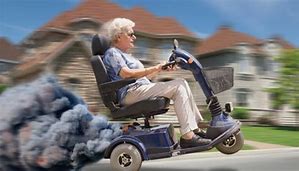 The day after Thanksgiving, I made my usual trip to the grocery in search of any food item that didn’t resemble a turkey. It was a fruitful excursion. I came away with ice-cream sandwiches, Ding Dongs, and Kinky Friedman salsa. Dinner was sure to be interesting.

As I was leaving HEB, I noticed a gathering at the far end of the parking lot, so I wandered over to see what the fuss was about. Being close to Sun City, a throng of seniors usually means a medical condition or someone got mashed by a car.

There, gathered under a brightly displayed “Scooter Town” sign, was a throng of senior citizens, milling about a display of personal electric scooters, or as I call them ” fancy wheelchairs.”

I squeezed into the mob to have a better view and was surprised at how beautiful this “new generation” of personal scooters were. The throng was “oohing and ahhing” as if they were witnessing the unveiling of the new Cadillac at the State fair car show. One old-timer commented to his wife that “these new-fangled scooters made his one at home look like a Model T.” I had to agree; they were light-years better than the one my Aunt Beula used to ride around Santa Anna, Texas.

One particular scooter caught my eye, so I moseyed over to check it out. As I was bent down, admiring the tires, the salesman walked up and said, “go ahead, sit in her, crank her up and take a test drive.”

” Aren’t these supposed to be for use in the house and grocery stores?” I asked.

“Heck no, he said, these aren’t your Grandma’s scooter boy, these are the new generation of senior transportation. You can drive these babies anywhere. Take them to the store, the post office, the gym,  Luby’s, the doctor- where ever. They are 100 percent street legal, and the best part is you don’t need a license. So…when the kids think your a vegetated pabulum sucker and take away the car, you can get one of these beauties and keep on trucking.

He was in full salesman mode now, and continued to explain in further detail:” take this model you’re looking at here, this is our newest one, The Woodstock Retro.

Notice the authentic tie-dye seat, the leather fringe appointments, the custom paint job, that is an exact copy of John Lennon’s psychedelic Rolls Royce. Upfront here, we have the hand made-Tibetan copper bull horn, and in the back, there is a 2500 lb wench with a carbonized cut-proof chain. The tires are reproductions of the legendary Goodyear Redline radials wrapped around these special little Krager Mags. To finish off the package, we’ve included a Lear-8 track tape player, a leather stash bag, and that cute little bird sitting on the guitar decal”.

“Why would you need a bullhorn and wench?” I asked.

” the bull horn” he exclaimed ” is for yelling at people that get in your way, such as punk kids or anyone disrespectful to old folks, and,  if you’re still feeling frisky like back in the day, it can be used to voice your opinion when protesting at Wal-Mart or the Social Security Office.

The wench and chain have come standard on our California and Oregon Protest models for years are for attaching you and your scooter to tree, gate, power plant, or structure of your choice. That cut-proof chain makes it tough for the police to get you unhooked.

Now, how about a test drive there.. boy?

I agreed and eased onto the cushy seat.

After a few minutes of instruction, I was ready to roll. I turned the ignition key and felt the “hard bump” of a  powerful transmission lighting up.

” Go ahead, gun the throttle, listen to those pipes,” said the salesman.

I gunned the throttle, and the digitally-reproduced sound of a Harly Davidson roared out of the side pipes. He was right, this was not my Aunt Beula’s  scooter.

The salesman sternly warned me to take it easy because the controls were extremely touchy. With that warning clearly ignored, I pulled the sleek little scooter onto the parking lot and accelerated down to the exit.

The salesman didn’t say anything about “not” driving in traffic, so I figured it would be alright to at least cross the street and take a spin around the Dairy Queen.

While waiting at the exit to cross the street,  I thought some tunes would be cool, so I reached down and pushed the button on the Lear 8 Track, and Steppenwolf blared from the two Bose side-mounted speakers. I also mashed a small button next to the sound system labeled “Turbo.”

“What the hell! Let’s see what this baby can do,” I yelled.

With “Born to Be Wild” blaring at 250 DB’s I gunned the throttle.

Now, I expected a decent surge of acceleration, but “I didn’t expect” that sucker to raise straight up on its rear wheels and do a “high ho Silver” wheelie across Williams Drive.

With absolutely no control of the scooter,  I shot down the busy street like an NRA dragster, narrowly missing a bread truck, an eighteen-wheeler, and three suvs by mere inches.

As I roared by a Cadillac, the lady behind the wheel crossed herself and showed me her rosary. With that sign, I figured “what the hell, I’m going to die.”

Pinned to the back of the seat by the G-Force, hand frozen on the throttle, I somehow made a hard right turn into the parking lot of the Dairy Queen, spewing dirt and gravel on cars waiting in the take outline, as I did a rubber-burning 360 and came to a stop.

The “little beast” expelled a  tiny raspy -cough from the shiny side pipes, shuddered a few times and died.

Stunned and disoriented, I dismounted the scooter, and on shaky legs, departed, leaving the little beast where it died.

Driving home, I decided that I ever need one of those scooters, I think I’ll buy something safer, like a Harley.

5 Replies to ““This Aint Your Grandmas Scooter””